For 30 years, MIT Media Lab has encouraged unconventional collaboration between seemingly disparate research areas to push boundaries and create new disruptive technologies. From wearables and cameras that can see through walls to robots that simulate human emotions and popular video games such as Guitar Hero, Lab members are always finding new ways to innovate. The latest technology to come out of the Media Lab and the Center for Civic Media is FOLD—an online open source authoring and publishing platform for creating modular, multimedia stories.

Anyone can publish on FOLD, but its unique structure makes it great for sharing science stories. Similar to trees, FOLD stories have a trunk and leaves. Text cards form the vertical trunk, while multimedia cards linking to images, videos, maps, data visualizations and other important context branch off horizontally from the text. FOLD is used mostly by journalists and other storytellers, but its creators are also working to bring scientists into the mix.  Last month, the startup hosted an event called Remixing Research, which brought together over 50 MIT researchers and people working across print media, podcasting, data journalism, and documentary film to discuss how scientists can communicate their research to the public through various storytelling techniques.

Oceans at MIT recently sat down with the brains behind FOLD, Alexis Hope, to discuss the importance of science communication and how scientists can get involved.

How did FOLD start?

FOLD started in a class called Future of News and Participatory Media. Half of the students in the class are mid-career journalists here on fellowship and half are geeks from around MIT. Every week we get a new challenge facing journalism, and then build a new tool or process trying to solve that challenge.

One week we were talking about the problem of readers jumping into a breaking news event and not having the background knowledge or the context to understand why these facts were relevant or important. We hypothesized that people feel stupid because they don’t have that background information and disengage from the story altogether, which we think is a problem.

Another student and I were writing a news explainer about the crisis in Crimea. It’s very complicated and there’s a lot of cultural and historical backstory there that you’d need to understand to know what was going on. As we were writing it we realized we had 100 open tabs in our browser. We were searching names, looking at maps, cross-referencing all these things. We had a lightbulb moment where we wanted to design an interface that would bring those things together in one place.

We noticed that science content works really well on FOLD, because science can be very visual and there are so many great resources out there on Youtube and other platforms, and FOLD pulls from all those. [It provides] a lot of the context you need to have to understand why a new development is important.

FOLD was built on this idea of standing on the shoulders of giants, which is also how science is done. There’s a lot that happened before you get to one moment of time in science. You’re building on other people’s work and bringing it in conversation with your own. As an expert, you already have that knowledge embedded in your head, but most people don’t know that. It’s important for all of us to reach a little deeper and try to think about what is the context someone needs to know why this particular thing I’m working on now matters.

I care a lot about science communication. I was a National Science Foundation graduate research fellow. Half of their mission is this idea of broader impact. I really take that seriously, and I think it’s kind of crazy that a lot of research is publicly funded but we’re not communicating that work to the public.

Why should scientists care about public engagement and communication? 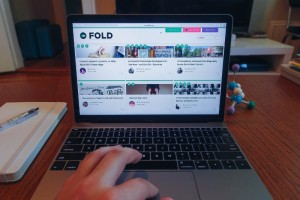 FOLD is an easy to use online publishing tool that adds context to stories, making them richer and more engaging–perfect for science communication. (Courtesy of Alexis Hope).

I think I’ve seen a lot of cases where the media misrepresents science. I guess with FOLD, I really think there’s value in scientists working to communicate their own message. If they don’t, then their story is more at risk of being framed in a way they don’t want. I would encourage scientists to take more control over the public communication side of things. I know we all get stuck in our daily grind and sometimes the last thing we think about is communicate what we’re doing to people. I think it’s so important, and not just so that you don’t get misrepresented. At least for me it makes what I’m doing feel more valuable when I get feedback from people outside of my immediate circle.

How can scientists get involved?

Right now, we’re trying to build up our own knowledge about how best to communicate science stories by working with scientists. That’s something we want to offer going forward. I’m really enjoying having personal meetings with scientists all across MIT to help them figure out how to tell a compelling story, make their work shine, and connect their research with people who’ve never heard of it before. We would love to meet with any scientists interested in writing stories on FOLD.