Keith Ellenbogen is a renowned underwater photographer and adventurer. He has spent his career documenting marine life — from Palau’s coral reefs to migrating bluefin tuna in the Mediterranean — not only to showcase their beauty, but also to inspire social change and action toward protecting the delicate underwater environments in which they live.

“As a photographer I can create a level of compassion and engagement in my images that is further supported by science and conservation efforts,” he says. “Hopefully these images connect with people quickly and viscerally, and motivates them to protect these places, create awareness, and change policies.”

Now, Ellenbogen has brought his talents to MIT as a visiting artist with the Center for Art, Science, and Technology (CAST). In collaboration with Edgerton Center Associate Director Jim Bales and theoretical physicist Allan Adams, Ellenbogen is exploring new high-speed photography and underwater imaging techniques, developing cutting-edge technology, and preparing to share his passion for marine conservation with MIT students in an upcoming Independent Activities Period (IAP) course. “When you put people together and you can create a place that allows ideas to really grow, it’s the most wonderful thing,” he says of the CAST program.

Although Ellenbogen has been photographing since he was a young boy, MIT physicist Allan Adams’ first introduction to high-speed imaging came in 2011. He worked with Jim Bales of the MIT Edgerton Center to photograph the high-speed collision of a cookie and a potato pancake for MIT’s Great Latke vs. Hamentashen Debate — a humorous academic event held to determine which traditional Jewish food is superior. The experience left Adams wanting more, and when he met Ellenbogen through mutual friends, a lightbulb went off. “Keith is a master underwater photographer, and Jim is a master image maker at the edge of technology,” Adams says. “Clearly these two worlds should play together.”

And play together they did. Adams and Ellenbogen, with support from the Edgerton Center and Tech Imaging Services Inc., filmed a variety of New England Aquarium underwater residents, including sharks, lionfish, and cuttlefish, at 1,200 frames per second in high definition. The resulting slow-motion videos revealed the awe-inspiring complexity of these creatures’ movements and behaviors, and were featured in a 2013 NEAQ exhibition “The Invisible Ocean—Extreme Time,” as well as various advertising campaigns. They continue working together, and recently returned from a trip to Patagonia, where they taught a course on wildlife conservation photography focusing on animals at the intersection of land and sea — specifically, penguins, elephant seals, and right whales.

“The collaboration and synergy between [Adams, Bales, and myself] is wonderful. We each bring our own expertise to the table and push each other in different ways,” Ellenbogen says. At MIT, the team is using that synergy to develop new technology that’s still under wraps. “We are exploring the role of which photography doesn’t have to be only in a straightforward linear path,” he says. “We are working together to push the boundaries of where we really are right now.” Ellenbogen added that the team hopes to demonstrate some initial prototypes and showcase the resulting images through the IAP course.

From Boston to Belize

“Students will team up with scientists who will explain the animals and the research they’re doing,” Ellenbogen says. “[They] will photograph individual animals for aesthetic purposes as well as to tell a conservation story or narrative that helps explain why the animals are significant.”Starting in January, students will have the opportunity to work with the team in an all-expenses-paid “Underwater Conservation Photography” course. “We’ll be teaching students everything from camera settings to how to build lighting systems for underwater work to building ROVs,” Adams says, referring to remotely operated vehicles. Students will spend three weeks in Boston learning new skills, working on the available technology, and testing out their equipment in pools and aquariums before heading south, where they will spend a week with the Wildlife Conservation Society on Glover’s Reef off the coast of Belize. 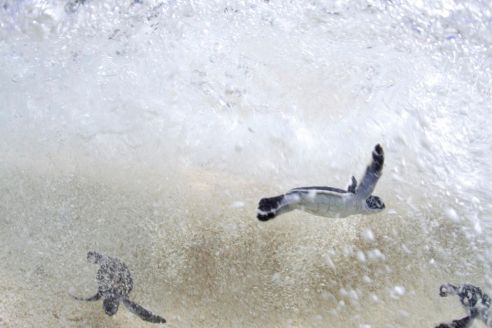 After hatching on the beach, a nest full of endangered Green Sea Turtles immediately race into the sea. (Credit © Keith Ellenbogen)

The resulting images will become part of an exhibition that will travel to museums, zoos, aquariums, and colleges around the world. An accompanying app will also allow visitors walking through the gallery to look up images to see their backstory and commentary from students. Eventually, the content from the app will serve as a permanent online exhibition.

“Part of creating science and art is creating things that you share and communicate. An image or an idea that remain in your head for all practical purposes don’t exist in the world,” Adams said. “The whole point of the course is to encourage students to think about the ways they can use visual culture and technology to communicate things that matter — ideas about conservation, ideas about science, and just beautiful things. It’s all about communicating. The concrete goal of having an image that will go out into the world is central to that.”

A group of California Sea Lions near the kelp forests off the coast of Monterey, California. (Credit © Keith Ellenbogen)