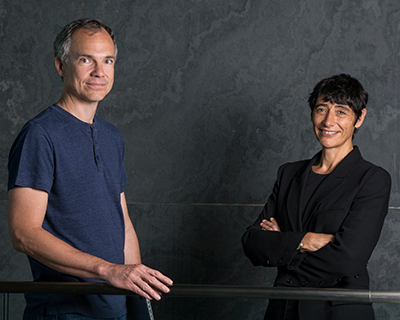 Sean Eddy and Elena Rivas are computational biologists at the top of their field. Hailing from the HHMI funded Janelia Research Campus just outside of Washington D.C., the husband and wife duo will join the Department of Molecular and Cellular Biology this fall—Eddy as a professor of molecular and cellular biology, and Rivas as a senior research fellow and lecturer.

Over the past few decades, the scientific spotlight has shifted from DNA to RNA as researchers realized the molecule’s increasing importance in evolution. Beyond biology’s central dogma lies an entire world of undiscovered classes of RNA—molecular clues that could tell us more about evolutionary history and bring the tree of life into sharper focus. Known for their cutting-edge technology, Eddy and Rivas build and harness computational tools that analyze the structure, function, and evolutionary history of RNA sequences in modern genomes. Their goal: to understand how complex biological functions evolve from low-level changes in the genetic code.