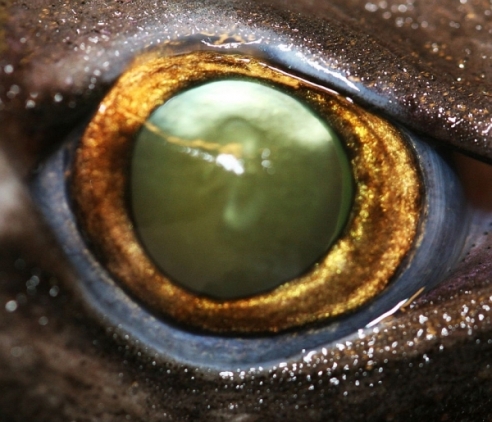 Eye of a velvet-belly lantern shark. The eyes of some species of bioluminescent sharks have more rods than their non-light producing counterparts, allowing them to see complex light patterns in the deep dark sea (Credit: J. Mallafet, FNRS/UCL) .

A dark and expansive habitat, the mesopelagic twilight zone of the deep sea is home to a variety of little-studied bioluminescent organisms including sharks. One of the many predators in these waters largely devoid of light, bioluminescent sharks have developed specialized visual systems that detect a high proportion of photons in their environment, giving them an advantage when hunting other light-producing organisms, communicating with one another, and camouflaging themselves from predators, according to a new study published in PLOS ONE.

Most deep-sea organisms have light-sensitive vision with low resolution, meaning they are able to distinguish the dim lights emitted by their neighbors, but not much else. Light-producing sharks, however, are able to detect dim lights and complex light patterns, indicating they may have increased resolution. To find out, Julien M. Claes, a postdoctoral researcher at the Université Catholique de Louvain in Belgium, and colleagues analyzed the eye shape, structure, and retinal cell mapping of five deep-sea luminescent shark species—four species of lanternsharks (Etmopteridae spp.) and one kitefin shark (Dalatiidae sp.)—using a variety of optical instruments including microscopy and spectrophotometry.

The researchers found the five species possess a translucent area in their upper eye-socket, which may help the sharks adjust to counter-illumination tactics used by prey or use their own bioluminescence to camouflage themselves from other predators. Other newly discovered structures include a gap between the lens and iris, which allows more light into the retina. Compared to non-bioluminescent sharks, these species had higher rod densities in their eyes, increasing resolution and making them more sensitive to light shifts. Claes and his team believe this adaptation is particularly useful for communication between sharks during social interactions.

“Every bioluminescent signal needs to reach a target photoreceptor to be ecologically efficient,” said Claes in a PLOS ONE press release. “Here, we clearly found evidence that the visual system of bioluminescent sharks has co-evolved with their light-producing capability, even though more work is needed to understand the full story.”

Future research will focus on the electrophysiology of the retina to understand the mechanisms of these adaptations and confirm their role in shark behavior. 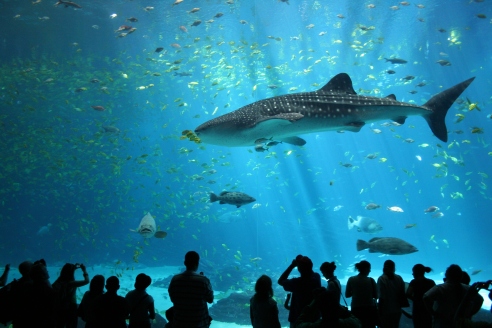 Whale sharks (Rhincodon typus) likely exist in two distinct populations with minimal connectivity, according to a new study published in the Journal of Molecular Ecology. This is the most extensive genetic study on the world’s largest sharks to date.

Thomas Vignaud of the Laboratoire d’Excellence in French Polynesia and his colleagues analyzed DNA isolated from skin samples taken from 675 whale sharks in the Indio-Pacific and Atlantic Ocean. The genomes of the whales from the two populations indicate that the populations are distinct, instead of belonging to one global meta-population. “If mixing occurs between the Indian and Atlantic Oceans, it is not sufficient to counter genetic drift,” write the researchers. Microsatellite—short repeating segments of DNA—and mitochondrial DNA analyzed from the samples also showed that the populations underwent a significant expansion before their recent decline. The expansion began sometime in the Holocene era—the geological period that spans from 11,700 years ago to today—when sea level rise allowed tropical species to expand their ranges, eliminating dispersal barriers and increasing plankton productivity.

Over the past six years, however, declines in genetic diversity at Ningaloo Reef off the coast of Australia indicate the whale shark boom is going bust. The researchers attribute the declining genetic diversity—which can leave species vulnerable to inbreeding, disease, and climate change—to human activities such as commercial harvesting of whale sharks and collisions with watercraft.

Vignaud and his colleagues suggest the findings have implications for models of whale shark population connectivity and advocate for continued focus on effective protection of the species at multiple spatial scales.

This article was originally published at The Wildlife Society News, August 19, 2014