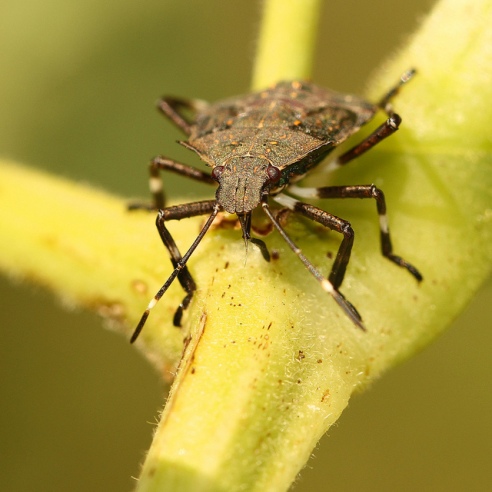 Have you noticed a strange smell emanating from inside your home recently? The culprit isn’t the garbage you forgot to take out last night, but a small invasive insect known as the brown marmorated stink bug (Halyomorpha halys).

The pests, which first appeared in the 90′s and ravaged the U.S. in 2010, are back with a vengeance. As the weather turns colder driving the bugs indoors, they’re stinking up homes and businesses across approximately 40 states–but are particularly rampant along the east coast. The stink bug gets its name from a glandular odor it emits when it’s frightened, disturbed, or squashed. The odor evolved as a defense mechanism against birds, lizards, and other predators and many people have likened the pungent smell to burning tires or cilantro (be glad Google Nose isn’t a real thing).

Stink bug distribution across the U.S. Image courtesy of the U.S. Department of Agriculture.

If you encounter a stink bug, don’t squash it. Instead, pest control experts recommend sucking it up with a vacuum and then promptly disposing of the bag. Ridding homes of stink bugs is fairly easy, it’s keeping them out in the first place that’s difficult. Homeowners and renters can protect themselves by sealing window and door cracks and trimming bushes and shrubs.

Although stink bugs are a nuisance to homeowners, they are particularly damaging to fruits and other crops such as soybeans, lima beans, peppers, and corn. In 2010, stink bugs were solely responsible for $37 million in lost fruit crop in the U.S. So far, the bugs have roamed free without a natural predator to keep them in check. Thankfully that is starting to change as more birds and lizards are adapting to the new species.

The government is also sponsoring research in an effort to combat stink bugs. The first project studies an Asian parasitic wasp that eats stink bug eggs and the second–called “The Great Stink Bug Count”–is a USDA project that relies on homeowners to count the number of bugs in their homes. Unfortunately for us (and fortunately for stink bugs), the shutdown has brought both of these initiatives to a halt.