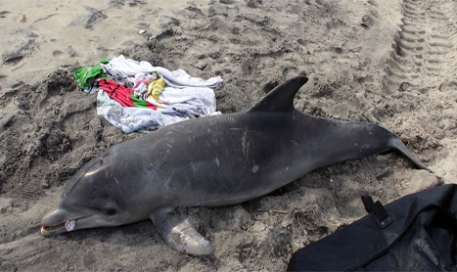 Bottlenose dolphin strandings occur year-round, and the Mid-Atlantic region sees on average 100 strandings per year, according to NOAA. But over the past month and a half the number of strandings has surpassed the annual average, concerning scientists and prompting NOAA to launch an investigation into the deaths. 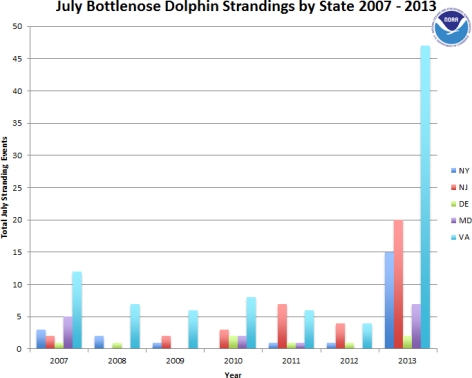 Bottlenose dolphin strandings in four Mid-Atlantic states during the month of July. Strandings are significantly higher than in recent years, and researchers have yet to find a cause. (Credit:NOAA).

Necropsies have not yielded a singular cause, but preliminary testing of tissue from three dolphins found in New Jersey showed signs of morbillivirus infection, according to NOAA spokesperson Maggie Mooney-Seus. “Morbillivirus is a common virus that can affect marine mammals including various seal and dolphin species,” Mooney-Seus said. In fact, from 1987 to 1988, morbillivirus ravaged bottlenose dolphin populations in the Mid-Atlantic region, killing more than 700 dolphins. Similar to canine distemper, symptoms of morbillivirus include lesions in lungs and the central nervous system. Some infected mammals also show signs of pneumonia.

Officials are not ruling out other potential causes of the outbreak. An investigative team of independent scientists, in collaboration with NOAA researchers, are testing blood and tissue samples for infectious agents such as viruses, bacteria, and fungi, and also testing for non-infectious agents such as biotoxins. Some of the dolphins killed in the 1987-88 unusual mortality event were not killed by morbillivirus, but were exposed to brevetoxin, a biotoxin associated with algal blooms uncommon in the region.

Dolphins and other marine mammals strand for numerous reasons, including changing oceanic environments, warming water, toxin exposure, disease, and malnutrition. Officials recommend that anyone who finds a live or dead stranded dolphin contact their local stranding network or local authorities and maintain a safe distance of at least 100 yards away from the animal.